“It’s impossible to potty train an Italian Greyhound”. “Don’t get an Iggy, they will never be fully house trained” – Does any of this sound familiar?

There are many rumours going around about house training an Iggy. So many Iggy owners seem to be struggling to get their puppy potty trained. Why is that? Is it really impossible?

No it’s not. Nello would rather burst into a million pieces than do his business inside. For him it’s not even an option he would take into consideration. I don’t know if we were just super lucky or did the right thing but at least it proves that it is possible to get an Italian Greyhound without having to worry that you’ll find a lovely surprise puddle or poop on the floor every day.

In this post we will tell you 5 helpful tips for potty training an Italian Greyhound. Let’s get started!

We did a poll on Instagram on this topic and 52% of Iggy owners said their Italian Greyhound is not 100% potty trained. 57% said they had a hard time potty training their Iggy. 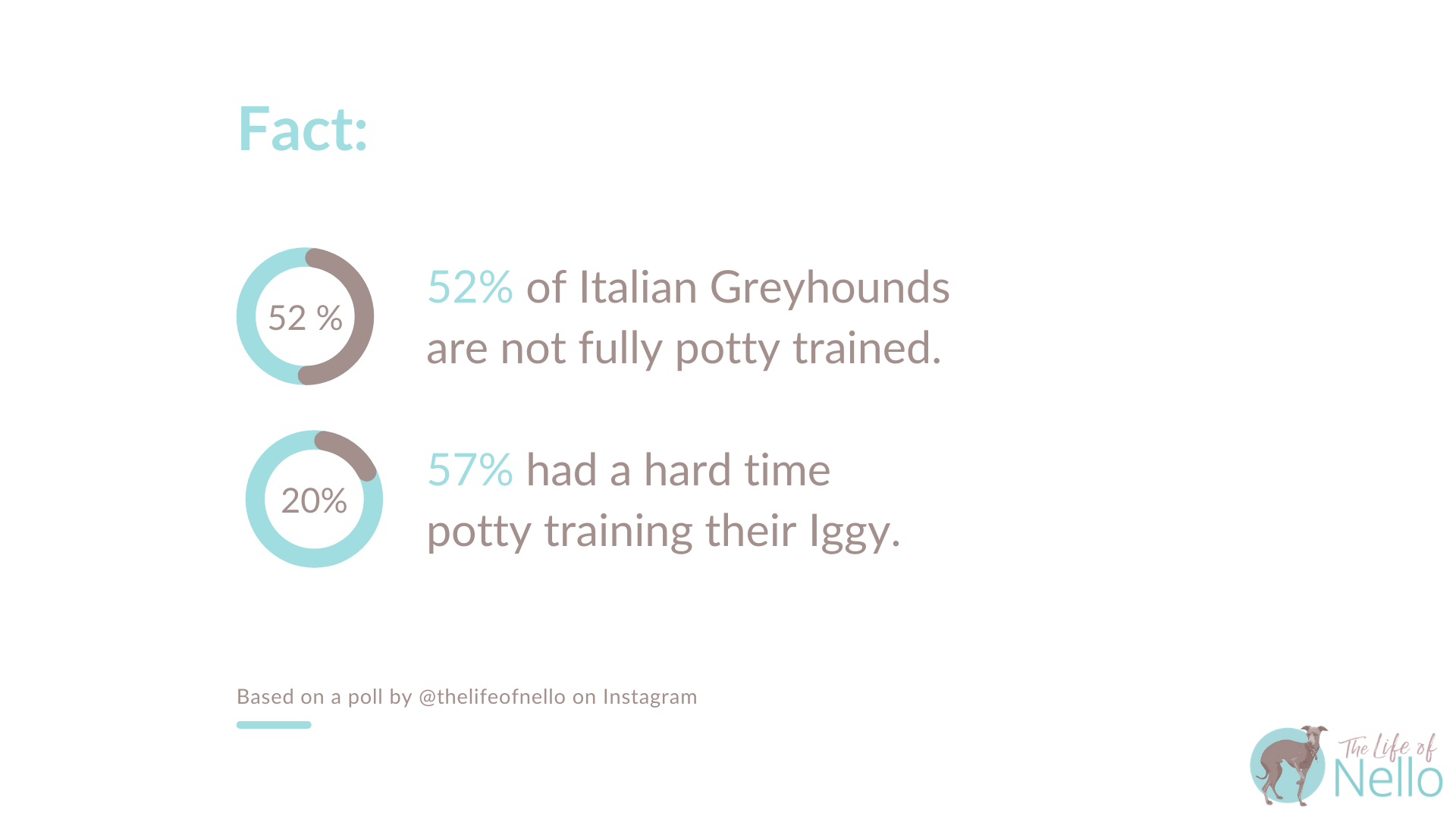 So as you can see it’s definitely not just a rumour. Italian Greyhounds, just like other small breeds, can be harder to potty train than other breeds. So if that’s a no-go for you, don’t get an Italian Greyhound. It’s as simple as that. There are so many Iggies ending up in shelters or going back to the breeder because the owners couldn’t handle it. And because nobody can give you a guarantee that even with the hardest training you won’t have any issues, you have to be prepared.

However, there are certain things that can be done to lower the risk of having problems with this topic that have worked for many Iggy owners including us.

1. Watch Your Puppy 24/7 and Learn Reading Their Signs That They Have to Go

It’s super important that you watch your puppy carefully and never let them unattended for too long. You want to see what they are doing and learn reading their signs that they have to go.

From our experience it’s not impossible to potty train them – but many Iggy owners just never learn to read their signs. Some Iggies won’t be very clear about it. They might only give you very subtle signs – and when being ignored, they just don’t have the patience to hold it in until you realize it. Every puppy is different but here are some examples of signs they might be showing:

If you don’t have the time to watch your little pup 24/7 (which you probably don’t have), just don’t give them the possibility to walk around in the apartment by themselves.

2. Take Them Outside Immediately and Establish a Routine That You Always Stick To

Once you notice they are about to go, take your puppy outside immediately. You have to be faster than them which means don’t even wait for them to squat.

This works best if you establish a routine that you always stick to. So take your puppy outside regularly. That means:

It’s better to go outside too much than not enough. Going outside every 2 hours should be a good starting point.

And we can’t stress this enough: Be persistent. Don’t find excuses like “I want to watch this show on tv now, I will go after that” or “After dinner I will go outside”. The less accidents happen inside, the faster the puppy will get the hang of it.

Do I Have to Go Outside During the Night Too?

When you get a puppy at 8-10 weeks old they probably won’t be able to hold it in for the whole night, so yes, you will have to go outside during the night as well.

From our experience you won’t have to go every 2 hours at night though. 1-2 times will probably be enough. But again, you want to make sure you don’t miss their signs they have to go.

If your puppy sleeps in bed with you it’s probably easiest because you will notice when they wake up and can take them outside right away. Another way is to keep them in a crate so they will start whining if they need to go and wake you up.

3. Get a Puppy in Summer or During a Period Where the Weather Is Nice

This leads us to our next tip: Get a puppy in summer! As mentioned before you will have to go outside quite a lot. And going outside is so much more convenient during summer time when the weather is nice – for both you and the puppy.

4. Teach Your Puppy a Potty Command and Praise Them When They Do Their Business in the Right Spot

Keep in mind that dogs learn through conditioning. That means learning occurs by association. You condition your dog’s reflexes to react to your signals. Over time, your puppy will learn to associate the signal with the event. Therefore it definitely makes sense to say something like “go potty” every time they pee or poop outside. Do it over and over again. After a while, they will know what you want them to do when you say that command.

After they’ve done their business in the right spot, praise your pup! And when we say that, we mean it. Go crazy! Act like it’s the most amazing thing your puppy has ever done (even if other people look at you like “what is going on?”). But your puppy needs to learn that this is what you want. If you want you can also give them a treat.

The last one is probably a bit of an unpopular opinion but we will say it anyway. We would not recommend to use puppy pads or dog toilets indoors.

Why? It only makes potty training so much harder. How is the puppy supposed to understand that puppy pads are okay to pee on, but the carpet isn’t? But they will definitely be able to tell a difference between outdoors and indoors.

We’ve never heard of one dog that uses puppy pads and never has any accidents happen inside. So even if it can be super convenient, we would not recommend it if you want your pup to be 100% potty trained.

Conclusion on Potty Training an Italian Greyhound – Persistence Is Key!

In the end you need to know that potty training an Iggy puppy can be tough and stressful for a few weeks. You will have to watch the puppy at all times and take them outside a lot.

And yet it’s inevitable that accidents will happen. When you catch them in the act, never punish them. Just take them outside immediately and show them where you want them to do their business. It’s always your fault and not the puppy’s!

Your hard training will pay off! And we don’t know about you but we’d rather have a few stressful weeks than a long life of issues with this topic.

Stick to our tips, be super persistent and learn to read your little pup’s signs and you’ll soon have an Iggy who’s fully potty trained.

Follow my daily adventures and receive helpful tips & tricks for owning an Iggy.